This article is about the version featured in TLS:DZ. For other versions, see Barrett (TLS1) and M82 Sniper (TLS:UC). For an overview, see Barrett M82 (overview).

The MSR-82 is a long rifle featured in The Last Stand: Dead Zone.

This descendant of the original M82 frightens even its users with its deafening sounds and intimidating size. The mounted bipod and lengthy barrel puts it on par with the M107, but its absurd weight makes it difficult even for a well-equipped team to carry around.

Used exclusively by the military.

While it sports a larger magazine than its M107 sibling, its large minimum effective range makes it dangerously ineffective at close range. Its move speed penalty is also the highest in the game, making it difficult for its wielder to flee. The MSR-82 is best used in large maps with plenty of open space, and should be adequately covered by other survivors. It may also be better used in compound defense, rather than on missions.

The Barrett, likely the basis for the MSR-82. 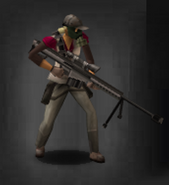 Survivor equipped with the MSR-82
Add a photo to this gallery
Retrieved from "https://thelaststand.fandom.com/wiki/MSR-82?oldid=130952"
Community content is available under CC-BY-SA unless otherwise noted.