The Manning AS Pistol is a pistol featured in The Last Stand: Dead Zone.

A racegun with a polymer grip and stainless steel frame, this M1911 based pistol is used in many competitions. The design of the barrel gives a more consistent performance and reduced muzzle flip; it also features integrated rails for adding any optics the user might desire.

Available in some North American gun stores, complete with complimentary T-shirt and cap.

Possessing a massive damage rating and having higher stats than most pistols, it is arguably one of the best pistols in the game. The primary downside is its high ammo cost.

The STI Grand Master, nearly identical to the scoped variant. 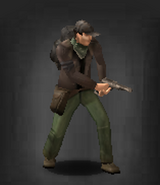 A survivor equipped with the Manning AS Pistol. 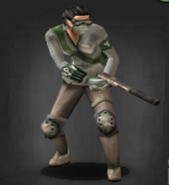 A survivor equipped with the Scoped variant
Add a photo to this gallery
Retrieved from "https://thelaststand.fandom.com/wiki/Manning_AS_Pistol?oldid=118231"
Community content is available under CC-BY-SA unless otherwise noted.