The Manning High Power .50 is a Premium pistol featured in The Last Stand: Dead Zone.

A licensed American copy of the Israeli AE-50 marketed to competitive pistol marksmen. Compensator slits are cut into the slide and barrel to minimize the .50 AE cartridge's ridiculous recoil, but results in each shot creating a deafening and blinding fireball at the muzzle.

A rare and very expensive firearm prior to the outbreak.

A powerful weapon capable of killing a zombie with nearly every shot fired, thanks to a high damage per shot and excellent accuracy. Its quick reload compensates for its small magazine, but its slow attack speed renders its wielder vulnerable should they face a large and/or fast-moving group of zombies.

The IMI Desert Eagle, which resembles the High Power 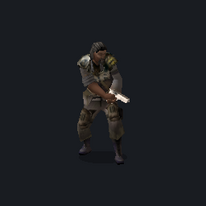 A survivor with the Manning High Power .50
Add a photo to this gallery
Retrieved from "https://thelaststand.fandom.com/wiki/Manning_High_Power_.50?oldid=114472"
Community content is available under CC-BY-SA unless otherwise noted.