The Militiaman's Minigun is a heavy weapon in The Last Stand: Dead Zone. It was only available during the Independence Day 2019 event.

With the music playing throughout the mission, infected will move to your location as soon as they spawn. Unlike other weapons of its type, the Militiaman's Minigun has no speed penalty, making it easier to reposition in combat. Works well on a Fighter or Engineer due to the LMG and improvised specializations. While it can handle most enemies on its own, other survivors are needed to counter its weaknesses depending on your choice of gear. 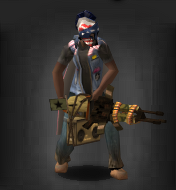 A survivor equipped with The Master's Militiaman's Minigun
Add a photo to this gallery
Retrieved from "https://thelaststand.fandom.com/wiki/Master_Militiaman%27s_Minigun?oldid=130811"
Community content is available under CC-BY-SA unless otherwise noted.