Matches are a component in The Last Stand: Dead Zone.

A box of matches.

Matches are a tool used to easily start fires. Wood is typically used because it's a combustible and flammable material. Sulfur was originally used as the starter, and would ignite when given a small amount of flame. In the 19th century, matches that produced fire with friction were developed. Phosphorus was originally used, but they started fires far too easily, and a single pack contained enough toxins to kill a person. Modern safety "red phosphorus" matches were produced in the second half of the century. They would only ignite when struck on a special surface and did not harm worker health.

Matches are used all over the world, whether it's for outdoor survival or a power outage or for lighting the candles on a birthday cake. 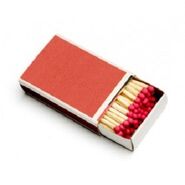 A box of matches in real life.
Add a photo to this gallery
Retrieved from "https://thelaststand.fandom.com/wiki/Matches?oldid=122493"
Community content is available under CC-BY-SA unless otherwise noted.