The Military Helmet is a type of headgear featured in The Last Stand: Union City. It appears as a PASGT helmet covered with a camouflage pattern, a protective piece of headgear formerly used by the U.S Army.

Military personnel encountered in Union City, both normal and zombified, are seen wearing this helmet, along with the rest of the military uniform, all having the same camouflage pattern (pictured in gallery below).

Helmets are one of the oldest forms of personal protection, and have played a crucial role in human history, guarding the heads of brave soldiers on the battlefield since ancient times. This modern version is designed for firearm-ruled warfare, and features ballistic armor and a mount assembly to attach various accessories such as night vision goggles or visors.

Issued to soldiers in military forces around the world.

It reduces the amount of damage taken by the player from all attacks that hit the head. Similar to the Riot Helmet and HERC Helmet, the Military Helmet weighs 3 lbs. 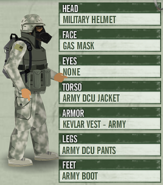 A Military Helmet dropped by a zombie
Add a photo to this gallery
Retrieved from "https://thelaststand.fandom.com/wiki/Military_Helmet?oldid=117500"
Community content is available under CC-BY-SA unless otherwise noted.