The Minigun is a heavy weapon in The Last Stand: Dead Zone. It was revealed during a discussion on a topic at the retired Get Satisfaction forums.[1]

Based upon the forerunner of the machine gun, the (in)famous Gatling gun, this lighter and electrically-driven variant can provide extreme volumes of fire without overheating, making it the weapon of choice for fast moving vehicles and very strong and/or desperate individuals on foot.

A powerful weapon used exclusively by the military.

Boasting the highest rate of fire and the largest magazine of any weapon in the game, the Minigun is the best weapon at suppression, making one invaluable in either defending/raiding a compound or engaging HERC troopers in the Raid on Union Island. It is also highly effective against the infected thanks to the sheer amount of lead it can put out, though each individual shot deals very little damage. While its knockback per bullet is relatively low, its sheer rate of fire makes it surprisingly effective at knocking back targets.[n 1]

These benefits come at the cost of a truly exorbitant ammo cost, with a single Minigun draining more than two-thirds of the ammo stocks of a fully upgraded compound. Accuracy is an issue as well, though this is partially mitigated by the fact that fighters have naturally high ranged combat skill. Its high move speed penalty and slow reload time makes its wielder a sitting duck, and its high noise generation ensures that any infected will be drawn towards them once they start firing. Support from other survivors is highly recommended.

Miniguns serve as formidable enemies when used by HERC troopers on the Raid on Union Island, or via compound defense during a normal compound raid. Its high rate of suppression is unrivaled, but the effects greatly diminish when the wielder is faced with its incredibly long reload time, leaving them vulnerable to attack in the meantime. They may also be countered by rifles that exceed the minigun's effective range, reducing the rate of suppression.

Miniguns are perhaps best used for compound defense, as the high ammo cost is negated then.

An airsoft M134 Minigun for use by an individual 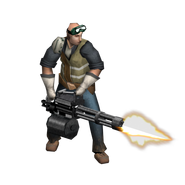 A promotional image depicting the Minigun in use.

Survivor equipped with the Minigun
Add a photo to this gallery
Retrieved from "https://thelaststand.fandom.com/wiki/Minigun?oldid=131017"
Community content is available under CC-BY-SA unless otherwise noted.