Not to be confused with Raiding.[n 1]
For the category of books, see Mission books.

Missions are the primary form of gameplay in The Last Stand: Dead Zone. Survivors can scavenge for items and resources whilst battling the infected, earning XP in the process. Players may choose to automate a mission or to play it manually.

Each location has a level dependent upon the level of the region it is located in and the location type. It determines the strength and types of the infected present and is also the maximum level of the items that can be scavenged from that location.

Selecting one of these locations brings up the "Travel To Location" menu, where a set of useful information is displayed:

On this menu, the player can assign up to 5 survivors to each mission, as well as equip them with weapons and gear. Each assigned survivor must be equipped with a weapon before the mission can be launched. Survivors away from the compound cannot be assigned to missions, though those who are injured or tasked with removing junk piles in the compound can.[n 2] At least 1 survivor with a weapon must be assigned before the mission can be launched. In addition, missions cannot be launched if there are less than 10 minutes left before a server shutdown.

Players can choose to automate the mission by clicking on the appropriate option just above the "Launch" button. Doing so will multiply the Return Time by 1.5 (to a minimum of 10 minutes) and immediately complete the mission. Items obtained during an automated mission, as well as the dispatched survivors' statuses, are not revealed until the survivors return.[n 3]

Certain locations in the Dead Zone may see a higher number of infected than usual at times. These are known as "High Activity Zones", and will be specially marked on the map and labelled as such. High Activity Zones will spawn more zombies and elite infected, but will also provide the player with higher quality loot. Players cannot run automated missions in these locations.

Once the mission is launched, if the player didn't choose to automate the mission, the assigned survivors spawn on the appropriate map in an exit zone marked in green,[n 4] though survivors may not spawn on (or anywhere near) an exit zone on some maps. There are typically several infected spawn points along the borders of the map, along with already spawned infected wandering the area.

Zombies and dogs attack in waves, where they will spawn until the population limit (determined by the level of the location) is reached. Once the limit is reached, no more infected will be spawned until all existing zombies are eliminated. When spawned, they will wander around until they are alerted, either by seeing a survivor or hearing noise generated by weapons, in which case they will move towards the survivor/noise source and attack anyone they see. The infected occasionally also attack in large hordes, preceded by a unique sound cue and blood stains on the edges of the screen.

The portraits of the participating survivors are on the bottom of the screen. They can be selected via clicking on their portrait or physical body. They can also be selected by pressing the 1-5 number keys, corresponding to the order of portraits, or by pressing the "Tab" key, which cycles through them. Once selected, a survivor can perform the following actions:

Survivors with firearms will automatically attack any infected within their effective range while survivors equipped with melee weapons can begin moving closer at around twice their weapon's effective range, as long as the zombie has been alerted to any survivor's presence.[n 5] They will also automatically reload at less than 50% [n 6](if there are no infected within sight) or when their weapon is empty. They also have a base 2% chance of scoring a critical hit, which increases the damage dealt.

Survivors also have a small chance to dodge infected attacks, which is dependent on their Melee Combat skill and is increased if they are wielding a melee weapon. Dodging has a cooldown before the survivor can dodge again. Survivors cannot attack or reload whilst moving, scavenging or healing, and the latter two also disable dodging.

Survivors have a chance of receiving a minor injury if they are hit while below 50% health. When they do, they will lose a section of health that cannot be healed during a mission, and will require time or specific medical items to treat. Injuries may also penalize other stats, depending on the type of injury.

Survivors are incapacitated once their health is depleted, meaning they cannot perform any further actions and will receive a severe injury once the mission is over. They are depicted as lying unconscious on the ground and their portrait will be greyed out. Should all survivors be incapacitated, the mission will automatically end and none of the scavenged items or resources will be available in the compound.

Once the mission ends, the player is returned to the compound and a mission report will be generated. All items and resources scavenged during the mission are immediately available once it is completed, unless all survivors were incapacitated or if the mission was automated. The location will be locked for 22 hours, meaning that no further missions can be sent there until the lock expires.

There are a set of small tasks that provide extra XP during each mission. For the timed ones, the hidden timer resets each time the requirement is accomplished. They are: 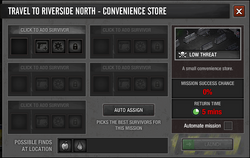 The old Travel To Location menu 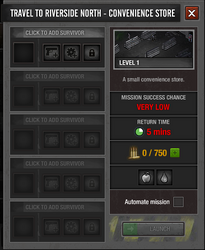 The Travel To Location menu 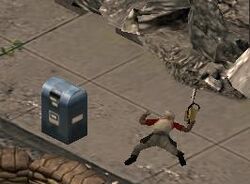 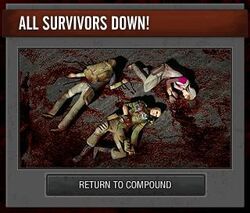 This image is shown when all compound survivors are incapacitated 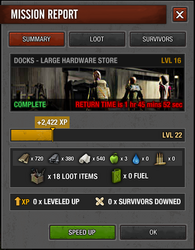 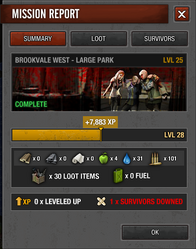 Retrieved from "https://thelaststand.fandom.com/wiki/Mission?oldid=131205"
Community content is available under CC-BY-SA unless otherwise noted.