"In modern society over half of our cities food, water and building materials are imported. The imports stop, society stops."

Cities are not self-sustaining, especially in modern society. Most residents know little about the materials they obtain other than the fact that it came from a store. Little to no food is grown within city limits. Almost all raw material, from lumber to metals to electricity and even water, must be imported from elsewhere. Stop the imports, and you'll stop the city.

Decreases the drop chance of resources when scavenging. 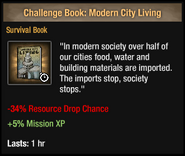 Add a photo to this gallery
Retrieved from "https://thelaststand.fandom.com/wiki/Modern_City_Living?oldid=126549"
Community content is available under CC-BY-SA unless otherwise noted.