The Office is a type of location that can be searched in The Last Stand: Dead Zone.

It was the workplace for many men and women in the days before the Outbreak. Every day, they arrived at the office to sit at a desk in front of a computer all day long, playing solitaire when their boss wasn't looking. Those office workers (and the electricity required to power the computers) are long gone, but maybe the paperclips that remind you of Clippy could be of actual use instead of an annoyance...

The level of this building is always equal to the area it is located in.

Being of merely average size, the Office should be fairly simple to complete. There are four zombie spawns spread out around the map — thus it may be desirable for survivors to be stationed outside each spawn, leaving the scavenger free to clear out the map. Assault rifles and shotguns are recommended here, as there is a mixture of large and small rooms. 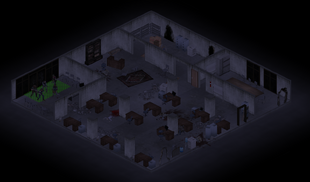 Layout of the Office 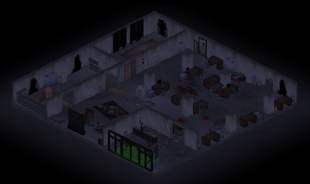 Alt. view of the Office
Add a photo to this gallery
Retrieved from "https://thelaststand.fandom.com/wiki/Office?oldid=102750"
Community content is available under CC-BY-SA unless otherwise noted.