Not to be confused with the PDW-M.

The PDW-R is a submachine gun featured in The Last Stand: Dead Zone.

A compact PDW[n 1] in bullpup configuration, it's one of the few PDWs to use a standard assault rifle caliber. It features a pistol grip and ergonomics similar to the P-90, ambidextrous ejection system and controls and a tactical rail to install any desired optics.

Production of this gun was halted before the outbreak and only a few police forces and government agencies managed to acquire some.

This weapon's high rate of fire and quick reload means that it can quickly spray an almost continuous stream of lead. Unlike other spray and pray weapons, the PDW-R is more accurate compared to the others, meaning that most of its low powered shots will hit flesh and not air. The lower damage is compensated by high accuracy and rate of fire, making sure enemies get overwhelmed with the amount of bullets. Other than its rather high ammo cost, the only major downside is one it shares with most SMGs: its short range.

The Magpul PDR, the basis of the PDW-R 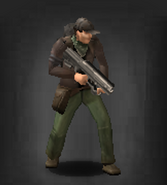 Survivor equipped with the
PDW-R

Survivor equipped with a Scoped PDW-R

Survivor equipped with a Suppressed PDW-R

Survivor equipped with a Suppressed Scoped PDW-R
Add a photo to this gallery
Retrieved from "https://thelaststand.fandom.com/wiki/PDW-R?oldid=123186"
Community content is available under CC-BY-SA unless otherwise noted.