This article is about the version in TLS:DZ. For other versions, see PPM 9 (TLS:UC). For an overview, see PPM 9 (overview).

The PPM-9 is a pistol featured in The Last Stand: Dead Zone.

Basically faster firing, faster reloading Tauron 9mm. They are otherwise nearly identical in effectiveness, and both are useful early on. However, its short range, low damage and small magazine means it should be replaced with more powerful firearms later on. 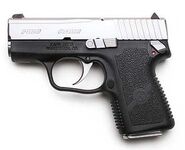 The Kahr PM9, the real life counterpart of the PPM-9

A survivor equipped with the PPM-9

A survivor firing the PPM-9 in combat
Add a photo to this gallery
Retrieved from "https://thelaststand.fandom.com/wiki/PPM-9_(TLS:DZ)?oldid=118235"
Community content is available under CC-BY-SA unless otherwise noted.