Wooden picture frame, the art has already been taken.

Pictures are worth a million words. But if they're really worth that much, surely they deserve more honor than being stuck at an awkward, unsightly angle with a school-grade glue stick! Finish the job with a picture frame, which borders the edges of the picture and leaves a delightful finishing touch. A picture framing glass may be used that goes over the picture, which guards it from dirt, dust, and your Uncle Joe that simply can't cover his mouth when he sneezes. Picture frames also allow pictures to be placed not only on the wall, but upright on surfaces such as dressers and end tables.

There are no set locations for the Picture Frame to be found in. Having a low searching skill may assist in finding one. 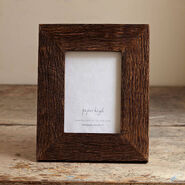 A wooden picture frame in real life.
Add a photo to this gallery
Retrieved from "https://thelaststand.fandom.com/wiki/Picture_Frame?oldid=117097"
Community content is available under CC-BY-SA unless otherwise noted.