Premium Z-Mas Boxes are a type of Z-Mas Box featured in The Last Stand: Dead Zone.

A Z-Mas box for premium survivors, ITEM and a RANDOM BOOST.

Zombie Santa may be generous to those who have made the Nice list, but he also looks favorably at survivors who are willing to part with their cash. Survivors who just can't seem to be Nice can splurge and corrupt — er, "donate to" — the jolly old man, and be guaranteed a nice, shiny gift under the tree no matter how naughty they've really been during the past year. These marvelous gifts can only be found locked securely inside Zombie Santa's private collection of boxes, which can be opened only by a special key that Zombie Santa selectively provides.

Much like Z-Mas Boxes, they can be found scavenging during missions, containing one item from a predetermined set, as well as a random boost.

They are unlocked by the Premium Z-Mas Key, which must be purchased from The Store using real-life currency. 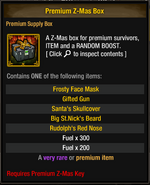 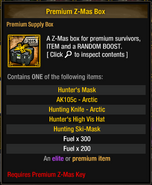 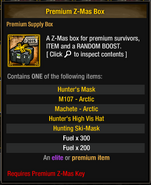 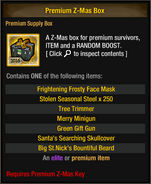 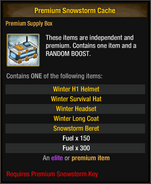 Add a photo to this gallery
Retrieved from "https://thelaststand.fandom.com/wiki/Premium_Z-Mas_Box?oldid=130853"
Community content is available under CC-BY-SA unless otherwise noted.