The Primer is a component in The Last Stand: Dead Zone.

Primer charge from an ammunition round.

The primer is the part of any firearm that, when struck with enough force, produces the heat needed to ignite the propellant and fire the projectile. When the trigger is pulled, the firing pin strikes the primer, causing it to ignite and burn rapidly. The resulting jet of burning hot gas ignites the propellant, causing it to explode. The expanding gases produced send the projectile flying out of the gun and towards its target.

Found in almost all pistol, rifle and shotgun munitions. 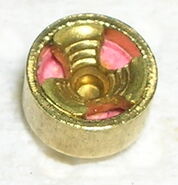 A primer in real life.
Add a photo to this gallery
Retrieved from "https://thelaststand.fandom.com/wiki/Primer?oldid=122501"
Community content is available under CC-BY-SA unless otherwise noted.