The Prison is a location that can be searched in The Last Stand: Dead Zone.

Prisons were used to hold and 'reform' criminals, keeping them out of society until they were ready to rejoin the race. When the outbreak arrived, HERC converted these places into makeshift bases for housing troops and research facilities. When HERC retreated from the city, they left tons of quality weapons behind, waiting to be picked up by the next survivor to wander the halls of justice.

The level of a prison is always 3 levels higher than the corresponding area.

The prison is a relatively complex map and has a variety of different environments, from tiny cells and winding corridors to a vast exterior with enough room to pick off zombies from a distance with a long rifle. A combination of weapons is recommended, with a shotgun, two assault rifles, a long rifle, and a melee weapon being the best option. The map's massive size also makes it very difficult to scavenge all containers without a proper scavenger.

The initial zombie horde should be cleared out before venturing inside the building, as the building's cramped interior makes large zombie hordes very dangerous. No zombies spawn inside the building, so a survivor group inside that is not making any noise may be able to temporarily "shelter" from the zombies. Players should carefully check for containers, as many are hidden behind walls or are otherwise difficult to spot. Once the building is cleaned out, survivors may move outside and scavenge the containers there. Move quickly, as the outdoor containers are spread out thinly across the map.

Due to the quantity of zombies that can spawn on this map, keeping survivors together is the wisest option, as individual survivors can get overwhelmed very quickly. 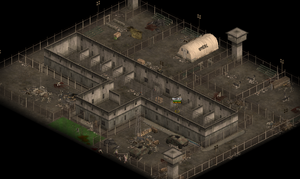 Layout of the Prison (A) 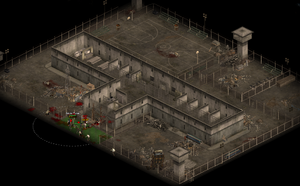 Layout of the Prison (B) 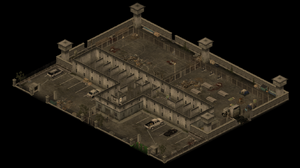 Layout of the Prison (C) 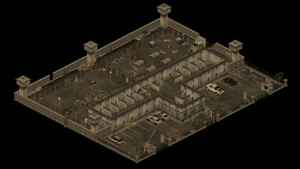 Alt. view of the Prison (C)
Add a photo to this gallery
Retrieved from "https://thelaststand.fandom.com/wiki/Prison?oldid=104567"
Community content is available under CC-BY-SA unless otherwise noted.