Protection is a service available in The Last Stand: Dead Zone.

Protection for your compound. Stops attacks from rival compounds.

When players first enter the Dead Zone, they will receive several days of protection in order to allow them to get used to their new surroundings. Players will also receive protection if their compound has been raided often,[n 1] unless it was raided by someone with the same IP address.

There is a cooldown period of 4 hours per attack should the player engage in a raid, preventing them from purchasing protection. This stacks to a maximum of 24 hours should subsequent raids be carried out.

Protection can also be purchased from The Store: 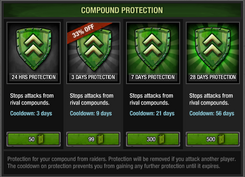 The Protection section of The Store. 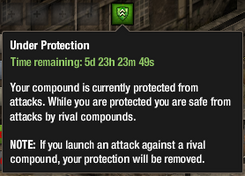 The message shown whilst a compound is under protection.
Add a photo to this gallery
Retrieved from "https://thelaststand.fandom.com/wiki/Protection?oldid=126491"
Community content is available under CC-BY-SA unless otherwise noted.