This article is about the version in TLS:UC. For other versions, see RPG (TLS2). For an overview, see RPG (overview). For the ammunition type, see RPG Rounds.

The RPG is a rocket launcher featured in The Last Stand: Union City.

The same weapon as in the previous game, only with some additional hazards that the player must take into consideration; while still extremely effective against large groups of enemies (and of any type), it is just as dangerous to the player in enclosed spaces, as the projectile has no distance safety (unlike the M79). The lack of safety can be useful, however, in situations where players are being swarmed, though not without cost to their health. It should be used sparingly against large groups, preferably at a great distance.

The RPG-7 in real life, complete with detachable rocket 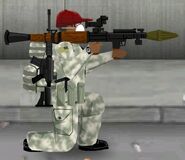 The RPG prepared to fire

The Damaged variant of the RPG (the stats remain the same as the Normal variant)
Add a photo to this gallery
Retrieved from "https://thelaststand.fandom.com/wiki/RPG_(TLS:UC)?oldid=114545"
Community content is available under CC-BY-SA unless otherwise noted.