The Radio Microphone is a component in The Last Stand: Dead Zone.

Radios that broadcast and transmit audio across the airwaves require an input in order to work. In the case of broadcasting voices, a microphone is typically used. Sound is processed by the microphone and converted into electrical energy. This electrical energy is sent to a transmitter, where it is converted into electromagnetic radio waves that move away from the transmitter at the speed of light. Condenser microphones are generally favored for radio communication due to their higher quality, which is important considering that radio waves can and do get garbled as it travels, and transmitting an already low quality sound may result in unrecognizable messages on the other end. In the case of two-way radios, a "Push-to-Talk" button may be located on the transmitter or the microphone itself; the button must be pushed in order for the microphone to work. In order to listen to incoming messages, the button must be released. Therefore, two-way radios can be used to speak and to listen, but not simultaneously.[1]

Can be purchased directly from a two-way radio manufacturer and are often used by the military, law enforcement, and rescue teams, although civilian versions do exist. 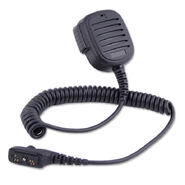 Radio microphone in real life
Add a photo to this gallery
Retrieved from "https://thelaststand.fandom.com/wiki/Radio_Microphone?oldid=115486"
Community content is available under CC-BY-SA unless otherwise noted.