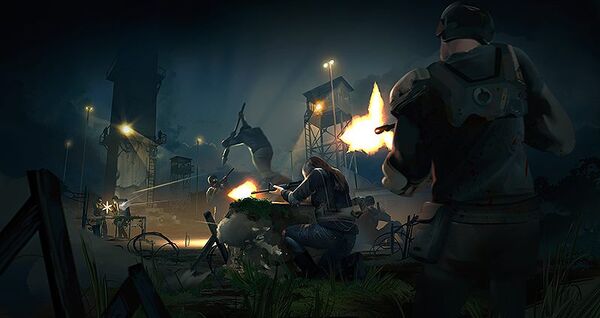 The Raid on Union Island is a special PvE[n 1] mode featured in The Last Stand: Dead Zone.

Reports from fellow survivors confirm that HERC have returned to the DEAD ZONE. Using the ruins of Union Island, HERC are establishing a new base of operations. Strike now and take what you can from them!

It is only available to Level 50+ players, and is indicated by a special symbol located at Union Island. Once initiated, there is no time limit on completion, but any assigned survivors will remain locked there unless they are downed during the raid.[1] Ammunition will only be consumed when beginning the first location; beginning subsequent locations will not consume additional ammunition.[2]

In order to complete the whole raid, the player must successfully complete three locations: Bridge (Level 51), Monument (Level 53), and Compound (Level 55). Each location has its own selection of maps, and maps are randomly selected every time the raid is attempted. After successfully completing a location, everything looted from that location will be available immediately at the player's compound.

The player may choose to begin the next location at any time. However, any injuries the assigned survivors have sustained cannot be healed and their equipment cannot be changed. Incapacitated survivors are sent home immediately and will not participate in the remaining locations, nor can replacement survivors be brought in.

There are destructible structures present in each map, ranging from optional objectives to doors blocking off certain areas. Melee weapons and explosives are more effective against them than firearms. Infected can attack doors blocking their path.

The main objective in every location is the same: Reach the exit zone within 10 minutes. At least one survivor must be in the exit zone when the timer expires; the raid will fail if there are no survivors in the exit zone, regardless of how many enemies were killed or how many containers were scavenged.

If enough raid points are earned, the player may receive a special "Raid Haul." There will also be an optional side objective in each location. Completing them will provide the player with more points, increasing the chances of the player receiving better items in their Raid Haul.

If the raid fails, everything looted from the location the raid failed in will be lost and no Raid Haul will be awarded, though items from previous locations will remain. If the raid is aborted, all items already scavenged will remain, but the Raid Haul will not be awarded. If all three locations are successfully completed, all survivors and loot will be available at the player's compound immediately. In all of the above, the raid will be placed on a 23-hour cooldown.

The side objectives are:

Two types of enemies may be spawned during the raid. Only one type will appear per location; both types will not spawn simultaneously.

A set amount of HERC soldiers will be deployed throughout the map. Most of them will be hidden behind cover, but a few will be stationed in towers and Humvees, the former of which cannot be destroyed. They will not move and are generally equipped with AK-105s, HERC-S3s, VS-121s, MSR-82s, RPK-12s, MP7s or miniguns. Both survivors and HERC soldiers can be affected by suppression.

Maps that spawn HERC soldiers have fewer lootable containers, but have more objects that can be used for cover, as well as more destructible structures. HERC Mines will also be planted across the map, which are difficult to disarm. Soldiers will not respawn when killed.

Maps that spawn zombies function similarly to normal missions. They will contain more lootable containers and generally do not have HERC Mines, although some may occasionally be present. Zombies of all shapes and sizes may spawn, and more will be spawned when existing infected are killed.

The Raid Haul is only awarded to players who have earned at least 50 raid points and have successfully completed all three locations. Points are earned by successfully bringing survivors to the exit zones (10 points per survivor) and completing the optional side objectives (50 points per completed objective), meaning that a maximum of 100 points can be earned per location, and a maximum of 300 points for the entire raid.

After the raid is complete, players can claim their prize by accessing the Raid page again and clicking the "Collect Reward" button. The quality of the haul increases depending on the amount of raid points the player earns:

Announcement image for the Raid on Union Island (click to enlarge)

A promotional image illustrating the skyline of the island 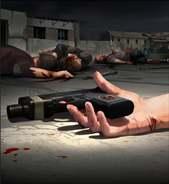 The image shown when a raid fails

The image shown when the entire raid is successfully completed