Raiding is the only form of PvP in The Last Stand: Dead Zone.

Raiding is started by selecting another player's compound from the neighborhood and clicking on the 'Attack' button. A player cannot be raided if they are under protection, are online, below or too far above the prospective raider's level (raids can only be initiated on other players that are less than or exactly 5 levels higher and 4 levels lower than the raider. Level restriction does not apply if they are on the player's Friend list or the selected player had raided the player's compound before), if they have the White Flag book equipped or has been banned from the game.

Choosing to attack a compound will bring up a view of said compound. The player must then select a spawn location in the green safe zone on the outskirts of the compound being raided. Once a location is chosen, survivors can be assigned to the raid and be equipped with weapons and gear. All the same restrictions from regular missions apply. The Danger Level and Return Time (capped at 4 hours) scale with the targeted compound's level. Raids cannot be automated. There is a 3-minute time limit on deployment.

Raids are controlled in much the same way as regular missions, though they have an increased 8 minute time limit and some minor control differences:

Suppression and cover play a large role in raids, as the vast majority of survivors are equipped with firearms. See the respective articles for further details.

Once deployed, the raiding party can engage in combat with other survivors (they will be under AI control, be armed with the weapons the defending player has assigned them,[n 2] and will spawn at the Rally Flags or defensive buildings they were assigned to, or randomly should they not be assigned to any) as well as stealing the rival compound's resources in the same manner as scavenging. Some or all of the rival compound's survivors may not take part in its defense should they be returning from a mission.

All traps that are available will be automatically armed. Traps are initially hidden from view until a survivor spots them,[n 3] and will be triggered when one of the raider's survivors comes near or runs over it, damaging them.[n 4] Traps can be disarmed, but the survivor disarming the trap is vulnerable to enemy fire, and the trap will trigger automatically should the survivor fail to disarm it.[n 5] Traps can also be destroyed using grenades or Explosive Charges.

Only resources can be stolen, and only from storage and production buildings. Half of the resources present in a storage building may be stolen, though the rival compound will only actually lose half of that, for a total of a 25% loss. All resources present in a production building will be lost if scavenged from, on the other hand; the F.U.E.L. Generator and drop-offs will have 100% of their contents stolen as well.[n 6] Once the raid has begun, the victim will not be able to log in for the duration of the raid.

Much like a regular mission, any raider that is not on the green exit zones will be instantly incapacitated when the timer runs out and will receive a severe injury. Once the raid has ended, the player is returned to the compound screen and a mission report will be generated. All resources scavenged during the raid are immediately available once it is completed, unless all attacking survivors were incapacitated. Additional raids can be launched against the same compound, but it will be placed under free protection should it be raided too often.

The raided player will receive a report of each raid once they log back in, summarizing what they lost and how many raiders their defenders managed to bring down. This report can be downloaded onto their computer in a JPEG format for future reference.[1] They will also have the options of launching a retaliation strike or placing a bounty on the raider through the Bounty Office.

There is an option called "Raiding practice" that allows players to practice and simulate a raid on their own compound without consequences or return times. The rules work similarly to a normal raid, except no ammunition or active gear is used up, the defenders are clones of the player's own survivors, there are no injuries or damage to buildings and survivors, traps that are disarmed or triggered do not need to be repaired, and normal scavenging is disabled.[2]

There is a bug in which players with the White Flag book equipped would lose their protection against other player raids if they ran a raiding practice mission.[3] The only way to correct this bug is to un-equip the book and re-equip it after the three day cooldown.

A raid in progress

The old summary of a compound's success in defending their supplies 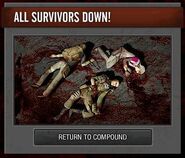 This image is shown should all of your survivors be incapacitated.

The message shown when attempting to log in during a raid

An example of a raid log, which can be downloaded via when the raided player logs back in
Add a photo to this gallery

Retrieved from "https://thelaststand.fandom.com/wiki/Raiding?oldid=129637"
Community content is available under CC-BY-SA unless otherwise noted.