This article is about the version in TLS:DZ. For other versions, see SCAR-H (TLS:UC). For an overview, see SCAR-H (overview).

The SCAR-H is an assault rifle featured in The Last Stand: Dead Zone.

An excellent all-purpose weapon in the vein of the M4A1 or FA-223, it possesses the highest RoF[n 1] of any assault rifle, which is combined with decent accuracy and damage per shot. It does possess a smaller magazine than other AR-types and chews through ammo quickly, but it will shred even groups of zombies with ease.

Survivor armed with the SCAR-H 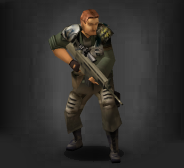 A survivor wielding the Scoped variant

A survivor with the Suppressed variant

Three survivors shoot their SCAR-Hs at a HERC zombie.
Add a photo to this gallery
Retrieved from "https://thelaststand.fandom.com/wiki/SCAR-H_(TLS:DZ)?oldid=117269"
Community content is available under CC-BY-SA unless otherwise noted.