The Serious Snow Bomb is a Z-Mas-exclusive active gear featured in The Last Stand: Dead Zone. They were first introduced in 2015 and later reintroduced in 2017 and 2018 with the Operation Whiteout and Winter Wasteland updates, respectively.

Bored of ordinary snowballs? Explosive-filled snowballs failing to satisfy you? Wanna give that guy who bullied you during high school or that jerk that always steals the last piece of fruitcake a lesson they will never forget? Add shrapnel to this fancier invention from the holidays, so they will take a bit of you with them. Literally.

Can be made at home with the right materials and the right morbidity.

Works similarly to a grenade; it will explode after a short period of time, causing damage to anything (including friendly survivors) within its effective range. They are permanently consumed upon use, and each survivor can only carry a certain amount per mission/raid. 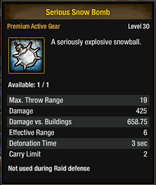 Level 30 Serious Snow Bomb
Add a photo to this gallery
Retrieved from "https://thelaststand.fandom.com/wiki/Serious_Snow_Bomb?oldid=129102"
Community content is available under CC-BY-SA unless otherwise noted.