The Sheriff Pants are a type of clothing featured in The Last Stand: Dead Zone.

The Glendale Sheriff's department members once wore brown and khaki pants as compliment of the standard-issued uniform of the sheriff's office. Along with it, a brown utility belt provided a spot to hold a firearm, baton, handcuffs and a flashlight. Being easily identified by residents of Glendale as symbols of order and authority.

Issued to all deputies of the Glendale Sheriff's Department.

It is purely cosmetic and has no real effect on gameplay.

It can be obtained by purchasing the Sheriff Clothing Bundle for $12.75 USD. 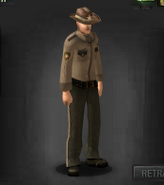 Complete uniform set.
Add a photo to this gallery
Retrieved from "https://thelaststand.fandom.com/wiki/Sheriff_Pants?oldid=130075"
Community content is available under CC-BY-SA unless otherwise noted.