The Shopping Strip is a location that can be searched in The Last Stand: Dead Zone.

These shopping strips aided in the portrayal of suburbia as offering the beauty and quaintness of rural living while simultaneously providing the services and luxuries of the city. The designers of Union City's suburbs were heavily influenced by classic "Main Street" designs of the 19th century and walkable urban streets found in the city's core, so they modelled their shopping districts after both ideas. The result was a pedestrian-friendly environment where community and local businesses thrived, making Union City's suburbs one of the most critically acclaimed places to live. While the lights and glory of the suburbs waned during the zombie apocalypse, remnants of good days long gone still remain.

The level of a Shopping Strip is always 3 levels higher than the area it is in.

Shopping strips resemble Streets or Highways, albeit with a higher spawn rate and containers scattered along the street. Survivors start on one end of the street and must reach the other side to exit the area. Zombies spawn from the alleys, the back of certain buildings and the roads located near the intersection.

At least one rifle is recommended along with assault rifles. Survivors should stick together as much as possible.

Layout of the Shopping Strip (A)

Alt. view of the Shopping Strip (A)

Layout of the Shopping Strip (B)

Alt. view of the Shopping Strip (B) 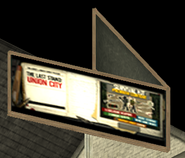 A billboard advertising The Last Stand: Union City and its Survival Kit addon.
Add a photo to this gallery
Retrieved from "https://thelaststand.fandom.com/wiki/Shopping_Strip?oldid=121588"
Community content is available under CC-BY-SA unless otherwise noted.