The Shower Curtain is a junk item in The Last Stand: Dead Zone.

Shower curtains serve two important functions: 1) Provide privacy for the user; and 2) Keep water from spraying wildly out of the shower area. Curtains are typically made out of vinyl or plastic, and are usually translucent, held up by curtain rods on the ceiling. Shower curtains are commonly used in shower-tubs, while modern shower stalls use shower doors to fulfill the same purpose.

Sold at home hardware stores and found in most showers. 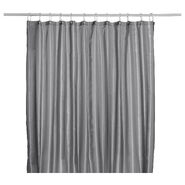 Shower curtain in real life.
Add a photo to this gallery
Retrieved from "https://thelaststand.fandom.com/wiki/Shower_Curtain?oldid=122625"
Community content is available under CC-BY-SA unless otherwise noted.