The Small Office is a location that can be searched in The Last Stand: Dead Zone.

These places were once the offices to small businesses and branches of larger ones. Before the outbreak, it was full of workers, ringing phones, and office chatter. Now those office utensils are used for more interesting and brutal purposes...

The level of this location is always equal to the area it is located in.

The small office is one of the smallest mission maps in the game. There are three infected spawn points, with two being very near to each other. The map should generally not be difficult and is doable with just one or two survivors, with plenty of left over time. Long rifles will suffer greatly in such a confined space, and considering the simplicity of the map, they are better off not being brought along. Melee weapons are best suited for this simple map, with an SMG being handy for higher-level locations. 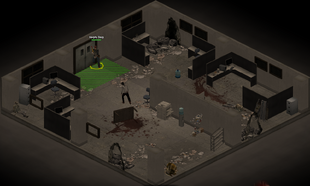 The layout of a Small Office
Add a photo to this gallery
Retrieved from "https://thelaststand.fandom.com/wiki/Small_Office?oldid=107097"
Community content is available under CC-BY-SA unless otherwise noted.