The Snow Bomb is a Z-Mas-exclusive active gear featured in The Last Stand: Dead Zone. It was first introduced in 2014, and later reintroduced in 2017 and 2018 with the Operation Whiteout and Winter Wasteland updates, respectively.

Can be made at home with the right materials.

Works similarly to a grenade; it will explode after a short period of time, causing damage to anything (including friendly survivors) within its effective range. They are permanently consumed upon use, and each survivor can only carry a certain amount per mission/raid. 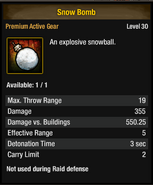 Level 30 Snow Bomb
Add a photo to this gallery
Retrieved from "https://thelaststand.fandom.com/wiki/Snow_Bomb?oldid=128984"
Community content is available under CC-BY-SA unless otherwise noted.