A metal spatula, great for frosting cakes. I miss cakes.

What tool is called which can be confusing, and the spatula is no exception. In American English, a spatula is usually used to refer to a turner, a short spade with holes on one end and a handle on the other, usually used to turn sizzling eggs or pancakes on the frying pan. This tool is called a "fish slice" in British English. "True" spatulas are often called "frosting spatulas" or "palette knives." They have a long, blunt blade used to spread a substance onto a flat surface, such as frosting on cakes. They may also be used to level out dry measuring cups. Scrapers, which are made out of rubber and are usually used to scrape sticky dough out of bowls, are also called "spatulas," further adding to the confusion.

Whatever your definition of a spatula is, all utensils dubbed "spatulas" are sold in kitchenware stores and found in most kitchens.

There are no set locations for the Spatula to be found in. Having a low searching skill may assist in finding one. 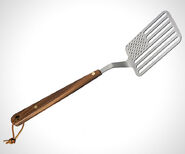 A "fish slice" spatula in real life.
Add a photo to this gallery
Retrieved from "https://thelaststand.fandom.com/wiki/Spatula?oldid=114960"
Community content is available under CC-BY-SA unless otherwise noted.