The Sportshot Carbine is a Premium rifle featured in The Last Stand: Dead Zone.

A replica of a light-weight and widely produced firearm that was once carried by American soldiers and their allies; from the battlefields of Europe to the jungles and islands of the Pacific. While still used in small numbers overseas, in America it is little more than a recreational plinking rifle.

An effective weapon for new survivors with Fuel to spare, it is superior in every respect to most of the firearms that can be scavenged early on. Unless the player has additional Fuel for upgrading it, however, it loses its effectiveness rather quickly and should be replaced with stronger weaponry.

The M1 Carbine, which resembles the Sportshot Carbine 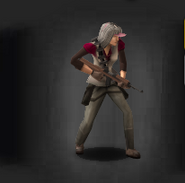 A survivor equipped with the Sportshot Carbine
Add a photo to this gallery
Retrieved from "https://thelaststand.fandom.com/wiki/Sportshot_Carbine?oldid=107893"
Community content is available under CC-BY-SA unless otherwise noted.