Sunglasses Round are a type of eyewear featured in The Last Stand: Union City. They are a rounded version of the Sunglasses, and are fairly common throughout Union City.

Who wears these things? Seriously.

The iconic round shape of sunglasses first became popular in the 20s and 30s, where fashion designers and future-predicting thinkers sported them, and they have remained popular throughout the 20th Century.[1] Notable celebrities like John Lennon and Lady Gaga[2] have all sported round sunglasses at one point in time, so why shouldn't you?

It is only a cosmetic item and has no effect on gameplay. Wearing it is a matter of choice.

The round sunglasses in the game files 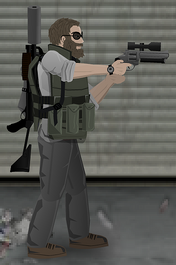 A survivor wearing a pair of round sunglasses
Retrieved from "https://thelaststand.fandom.com/wiki/Sunglasses_Round?oldid=110789"
Community content is available under CC-BY-SA unless otherwise noted.