Survivors are uninfected individuals who can join and fight with the player, and are present in all of the games in The Last Stand series. Note that the player character can also be considered a survivor, but for the purpose of this article, only the non-player ones will be described.[n 1]

In The Last Stand, survivors can be found by putting time into searching for them during the day. Jack can have a maximum of 6 survivors at any time. Survivors will shoot at enemies with specific weapons when defending the barricade during the night, and increase the effectiveness of barricade repairs during the day. Survivors can be lost when searching for other survivors or weapons. They will run away if the barricade is at very low health, but will return if the player manages to win anyway.

In The Last Stand 2, survivors are found by searching buildings. The player can have a maximum of 4 survivors at any time. As in the first game, they will shoot at enemies with specific weapons when defending the barricade during the night, increase the effectiveness of barricade repairs during the day, and will run away if the barrier is at low health, but will return if the player manages to win anyway. While survivors can no longer be lost through searching, they can be killed by weapon-using zombies.

All survivors initially have the unnamed pistol but can be equipped with any weapon, except for the Compound Bow, RPG, Chainsaw and Hand Grenades.

In The Last Stand: Union City players can get companions by completing their recruitment quest. The available companions in this game are Kelly and Hank. They will follow the player around and attack enemies that are alerted to either the player's or the companion's presence with whatever weapon they have equipped. The player and the companion can fire past each other without risking friendly fire.[n 3]

Players are limited to one companion at any time, and completing the recruitment quest for a second companion will prompt the game to ask whether the players would like to replace their current companion. Either accepting or rejecting that second request will lead to the player permanently losing one of the companions. The only way to obtain that companion again is through a new game.

Companions have their own hidden health bar and should it be depleted, they will be incapacitated and fall to the ground. Zombies can still attack them and they will die permanently if they take enough damage while incapacitated. They can be revived if the player manages to get next to them and presses the G key.[n 4] If the player fails to save their companion before leaving the room or dies before doing so, they will risk losing their companion and the weapon they were equipped with for the rest of the game.

Companions will never crouch, even when using firearms.

Kelly starts with a Kitchen Knife and Hank starts with a Hunter Compact,[n 5] but they can be equipped (by swapping weapons with them) with any weapon in the game, up to and including the M249 SAW, Chainsaw, RPG, and M82 Sniper. Generally, it is better to give them a ranged weapon, as they benefit from unlimited ammo and tend to rush headlong towards the nearest zombie if equipped with a melee weapon, which can end badly for the companion.

In The Last Stand: Dead Zone, all survivors can be manually controlled. Survivors arrive at the player's compound when certain requirements have been fulfilled, which can be checked by bringing up the Compound Progress Report. They do not always appear immediately, as the server only intermittently checks whether the requirements have been fulfilled.

The current maximum is 10 survivors, including the Leader (the Leader is the player character, but is controlled and behaves the same way as regular survivors). They can level up by gaining XP, which increases their stats and allows them to use higher level weapons and gear. New survivors are always 1 level under the leader's level when they initially join the compound. Each survivor also has an individual morale rating, which affects their stats further.

Initially, they have no class and cannot be sent on missions or be given equipment (unless an infected horde attacks the compound before their class is assigned, in which case they will equip the weapon with the highest DPS available) until the player has assigned one to them. Survivors can also be assigned to certain security buildings like Watchtowers and Rally Flags in order to defend the compound against intruders.

Each class has its own advantages and disadvantages, covered in their individual articles, and it is completely up to the player as to which one they select. Survivor classes can be changed at the Training Center. The available survivor classes are:

Each survivor has a series of skills, with the levels dependent on both the survivor's class and level. Each of these affects different aspects of a survivor's performance.

Survivors can be assigned to missions in the Dead Zone. Manually controlled missions have the player controlling the assigned survivors, while automated missions leave it to pure chance.[n 6] The controls are covered in the mission article. Survivors can also be tasked with removing junk piles in the compound, which takes a certain amount of time depending on how many survivors are assigned to that pile. Each survivor added divides the original time by the number of survivors.

Unlike previous games in the series, survivors cannot die. Should their health be reduced to zero or if they are not on a safe zone by the end of a mission, they will be injured and must either be treated with special medical items, or be given enough time in the compound for their injuries to heal. Their morale, maximum health and some of their skills (depending on the type of injury) will be penalized should this occur, which will be restored once they recover. Survivors also have a chance of getting a minor injury if they are hit while their health is below 50% - these have less severe penalties and recovery requirements.

Each loadout can have one weapon, one passive gear and one type of active gear selected. Survivors cannot equip items that are higher level than they are and some gear items are restricted to specific classes. Additionally, each class is specialized with certain weapon types, which grants them a 10% bonus to damage and accuracy when wielding one of those weapons.

Each survivor can also equip 4 accessories (including clothing), most of which provide small bonuses.

Their name and initial appearance are randomly generated when they first arrive at the player's compound. However, these can be changed at any time by entering the "Survivors" menu, selecting the survivor, and then on "Edit Survivor". There are several options that can be altered, including their gender, skin tone, voice and hair style.

Their worn outfit is solely dependent on their current class, but they can also wear a couple of additional accessories and clothing items. 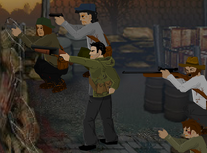 Jack with 4 other survivors (TLS1)

Jack killing a zombie alongside a pair of survivors (TLS2) 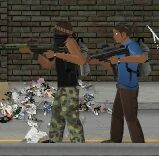 The player and Kelly, a Survivor Companion (TLS:UC)

Kelly after being mauled by zombies (TLS:UC)

A group of survivors (TLS:DZ)
Add a photo to this gallery

Retrieved from "https://thelaststand.fandom.com/wiki/Survivor_Companion_(NPC)?oldid=128125"
Community content is available under CC-BY-SA unless otherwise noted.