Not to be confused with Sword.

The Sword of Sparta is a Halloween-exclusive bladed weapon featured in The Last Stand: Dead Zone.

Paired with a sturdy shield and wielded by some of the finest soldiers in antiquity, these blades were used to slaughter tens of thousands of Persians. As fearsome as these swords were in melee, however, they could do little against arrow barrages that blot out the sun. (Note: Only 90% of the above is historically accurate.)

Survivors have crafted replicas of these blades, which retain all the horde-slaughtering potential of the originals.

With high damage and a quick swing, this weapon has an incredible damage potential and is capable of clearing out zombies with great efficiency. However, the weapon is relatively short, necessitating its wielder to close in. 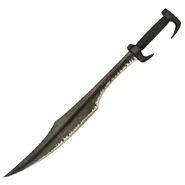 A replica of the Sword of Sparta 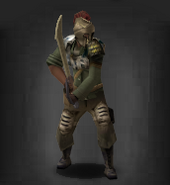 A Spartan survivor ready for battle
Add a photo to this gallery
Retrieved from "https://thelaststand.fandom.com/wiki/Sword_of_Sparta?oldid=106316"
Community content is available under CC-BY-SA unless otherwise noted.