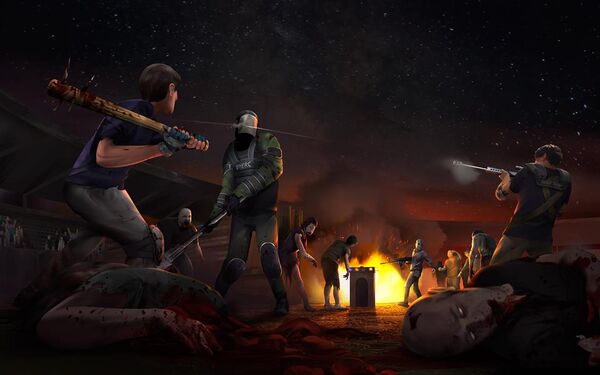 The Terror Dome is a special PvE[n 1] mode featured in The Last Stand: Dead Zone, located in the Stadium building.

The TERROR DOME is an entertainment event hosted by local madman, Woody Hackett. Pay your entry fee and risk your survivors [sic] well being for a chance at prizes and glory!

The Terror Dome is available to players who are at least Level 15, and can be accessed by clicking on a special symbol located over the Stadium itself. A fee of fuel is required to enter the event; the fee is level dependent, and higher-level players need to pay more to enter the event.[n 2] Survivors can try as many times as they wish as long as the fee is paid. Once initiated, there is no time limit on completion, but any assigned survivors will remain locked there unless they are downed.

Ammunition will only be consumed when beginning the first round; beginning subsequent rounds will not consume additional ammunition.

In order to earn one of the Terror Dome boxes, survivors must press special buttons scattered around the area as well as defend themselves from the ever-present zombie hordes. There are two kinds of buttons: red and green. Players can simply click on the buttons to press them, much like scavenging during normal missions, though red buttons take longer to press than green ones. Pressing these buttons do not award items, but will award points instead. The same buttons can be pressed more than once, although it takes some time for a pressed button to reset itself. The red button will reset faster than the green button when pressed, although both buttons provide the same number of points.[1]

While the map is the same, the layout changes every round as well as the location of said buttons. Survivors have only 3 minutes to press as many buttons as they can; once the timer expires, the round will end and the number of buttons pressed as well as the percentage of health remaining will be added to the score.

Survivors cannot heal in the Terror Dome, although their health will be refilled after each round.

Players may choose to begin the next round at any time. However, any injuries the assigned survivors have sustained cannot be healed and their equipment cannot be changed. Incapacitated survivors are sent home immediately and will not participate in future rounds, nor can replacement survivors be brought in. Players that have lost too many survivors can choose to bail out at any time.

Throughout the game, Woody Hackett will frequently make audible comments, giving the impression that the survivors are in a televised game show.

During the initial outbreak, Union City's Stadium was used by HERC as an evacuation center and command post; now, it is used for the Terror Dome competition. Instead of moving from location to location like in Union Island, survivors will remain on the same map but with a different setup of barricades and walls, creating a maze of sorts. Survivor cannot leave the football field, and there are no searchable containers.

Variant A of the Stadium
Add a photo to this gallery

Zombies are the ever-present threat in each round and they spawn rather quickly. Zombies of all shapes and sizes may spawn, and more will be spawned when existing infected are killed. Hordes from Level 55 to Level 57 are present. It should be noted that this is the only location where zombie hordes above Level 55 are present.

A special type of infected called Hunters will appear on the third round. Hunters are taller and look different than regular zombies. When Hunters are spawned, the screen will flash red, an audio cue will play, and Woody Hackett will announce its arrival. Killing them is not mandatory and does not yield points, but doing so will grant the player a Unique Elite Box.

The Prize Haul is only awarded to players who have earned at least 1500 points and have successfully completed all three rounds. Points are earned by pressing as many buttons as possible and by keeping survivors with much health as possible.

After the raid is complete, players can claim their prize by accessing the Terror Dome page again and clicking the "Collect Reward" button. The quality of the haul increases depending on the amount of raid points the player earns:

In Z-Mas 2016, the Terror Dome was decorated with holiday cheer, and introduced a special new enemy called "Zanta". A limited time Zanta Prize Box was offered.

In Easter 2017, Buck was available as a target in the Terror Dome for a limited time. "Rabbit Season" related hauls were also introduced. 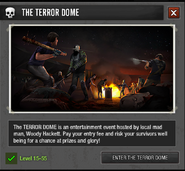 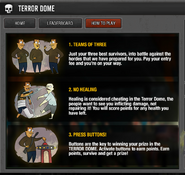 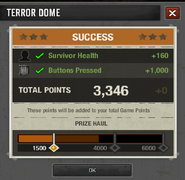 Fourm info of the terror dome

Retrieved from "https://thelaststand.fandom.com/wiki/Terror_Dome?oldid=123191"
Community content is available under CC-BY-SA unless otherwise noted.