The Candy Bar is a Z-Mas exclusive blunt weapon featured in The Last Stand: Dead Zone.

The symbolic candy cane was once seen as mini-decorations on the Christmas tree, or as sweets to give to the kids. The large, inedible ones were placed next to Santa as he sat, asking children what they wanted for Christmas. The latter has now seen far more brutal and devastating conversations as they are now used to whack, thwack, and wish a Merry Z-Mas to zombies and raiders alike.

Comparable to most other melee weapons at the same level, it deals fairly decent damage but at a cost in attack speed and a poor knockback. It should be limited to a support role, and equipped by survivors with high health. 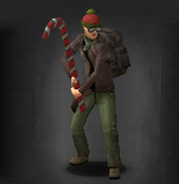 Survivor ready to thwack & whack with the Candy Bar 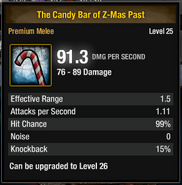 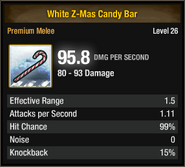 2017 "White Z-Mas" variant.
Add a photo to this gallery
Retrieved from "https://thelaststand.fandom.com/wiki/The_Candy_Bar?oldid=126535"
Community content is available under CC-BY-SA unless otherwise noted.