The Declaration is an Independence Day-exclusive assault rifle featured in The Last Stand: Dead Zone, introduced in 2017.

Modeled after its lootable relative, it is unabashedly average in almost all areas, with nothing besides its RoF[1] and damage standing out. However, the specialization in versatility is a trait of itself that should not be overlooked. With complementary equipment, this rifle is still serviceable in the right hands.

A glitched variant of The Declaration, erroneously renamed to a question mark. 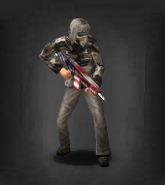 A survivor equipped with The Declaration rifle.
Add a photo to this gallery
Retrieved from "https://thelaststand.fandom.com/wiki/The_Declaration?oldid=131024"
Community content is available under CC-BY-SA unless otherwise noted.