Welcome to the beginning.

A worldwide epidemic has just occurred, causing the infected to die and then rise as monstrous undead cannibals. The U.S. government struggles to keep order, but each day they lose more ground to the swelling hordes now roaming the countryside and the city streets.

The end has finally come; it was only just a matter of time.

You, the player, must now take on the role of a resident of Union City — a fictional metropolis located on the east coast of North America. Amidst the chaos of a zombie apocalypse, the player must survive by scavenging for food, weapons and other supplies, finding safehouses to take shelter in, and fighting off the city's infected population, whilst meeting other survivors along the way who may accompany the player and/or give them various quests to complete, all in lieu of fulfilling the game's main storyline: to find your spouse, who is lost somewhere in the city.

The story begins when the player, driving home to Union City from work, collides with a zombie, which kills it but also causes the player's car to crash into a telephone pole. As the player exits their ruined car, they see other damaged and abandoned cars scattered all over the road leading into the city. The player then helps another survivor cut through a military fence blocking off access to the city.

After this, the player fights their way to their apartment in Brookvale, where they find a note written on the wall by their spouse, who has left to help out at the Hospital in Canal Park. Once they reach the Hospital, however, they find that their spouse had been taken to the local Stadium by the military, along with several other survivors. The player then fights their way to the Stadium, passing through Newtown and Uptown along the way.

After visiting the Stadium, it is revealed (with the help of Barry, another survivor) that HERC,[n 1] the organization charged with containing the outbreak, has taken the player's spouse for experimentation at one of their outposts located in Uptown, revealing a deeper conspiracy likely involved with the eradication (or creation) of the undead. After the player escapes the quarantined Stadium, they fight their way back to Uptown.

The player saves their spouse, who is nursing a zombie bite on their shoulder, from the HERC Outpost and escapes to the Docks. The couple meets Jack (the protagonist of The Last Stand and The Last Stand 2), who is leading a group of survivors, who informs them all but one boat had been destroyed, with the last one being defended by HERC.[n 2] After destroying the obstructions set up by HERC, the player and their spouse (and their companion if still alive) finally escape Union City, leaving Jack and his crew behind, who state they will find another way out.

In the final cutscene, however, the boat stalls, likely from engine failure or lack of fuel. Just before the screen fades to black, a familiar growling noise is heard...

The Last Stand: Union City introduced many new features to the series, such as an inventory system, a level up system, day and night cycles, as well as Achievements.

There are various different articles of clothing available to wear, most of which are purely cosmetic.

Stats are attributes like physical strength and intelligence, while Skills determine the player character's ability at performing specific tasks, such as firing pistols or picking locks.

Skill Books can be used to increase certain skills, depending on the book being used. Reading a Skill Book consumes it.

Supplies are a requirement for survivors to get by in Union City, as they help to heal wounds and satisfy your growling stomach. They are divided into food and drink and medical supplies. The effects of food and drink vary depending on the game mode chosen.

The Survival Kit is a premium game-addon that adds many new features, such as bonus clothing, new weapons, increased storage space, and more. Originally it could be purchased with an Armor Games account through PayPal for as little as 0.01 USD (1 cent). As of August 1, 2016, it is free and automatically available to all players on Armor Games.[1]

You can view your available quests by accessing the Journal.

The side quests given by Darnel Brown consist of items which you have to find and return to him. Since most of them are classed as Junk, they'll be listed here so the player knows what not to throw away.

See Quest for a full listing. 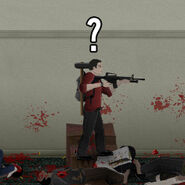 Second Q&A for the alphas. 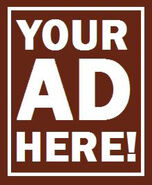 Contest to create fake ads for the game. 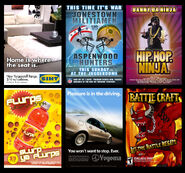 A few winning fake ads from the contest, featured in-game.

Alpha 0.85 screenshot; features ability to move in and out of buildings.

Contest for notes to be featured in the game. Winning entries will be awarded with early beta access.

Winners for the note contest announced; early beta emailed to all winners. Some of the winning entries are featured in the image.

Early character creator prototype released in "I Built this City Part 1 of 4".

Construction of Union City released in "I Built this City Part 2 of 4".