The Ticket to Valhalla is a Halloween-exclusive melee weapon featured in The Last Stand: Dead Zone.

In Norse mythology, Valhalla was a place where dead warriors deemed worthy by Odin dwell with him to prepare for the Ragnarök or the Fate of the Gods. Survivors that prove themselves as true warriors of the Dead Zone wastelands with this combo of battle axe and shield may rub shoulders with Norse gods in a great hall away from the mundane world.

Available during a certain time of the year and made of certain materials.

Much like its former counterparts, this weapon uniquely provides increased melee resistance and reduced chance of sustaining injury, resulting in its wielders being far more durable. Unfortunately, its short reach exposes its wielder, and while each individual strike is strong, they also come rather slowly. Support from ranged weapons is recommended. 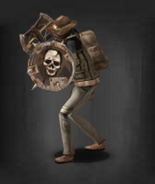 A survivor with the Ticket to Valhalla. 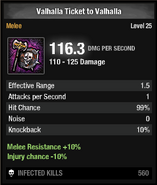 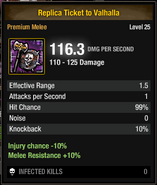 A Replica Ticket to Valhalla, introduced in 2016.
Add a photo to this gallery
Retrieved from "https://thelaststand.fandom.com/wiki/Ticket_to_Valhalla?oldid=120355"
Community content is available under CC-BY-SA unless otherwise noted.