The Trigger System is a component in The Last Stand: Dead Zone.

Basic trigger system from a firearm.

The trigger is the device that triggers the firing sequence for a projectile weapon, resulting in the projectile being launched from the weapon and towards the target. When pulled, the trigger initiates the hammer, which strikes the primer. Triggers are often shielded with a trigger guard, which protects against accidental discharging.

Present in most firearms. 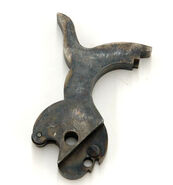 A revolver's trigger system.
Add a photo to this gallery
Retrieved from "https://thelaststand.fandom.com/wiki/Trigger_System?oldid=122515"
Community content is available under CC-BY-SA unless otherwise noted.