The USAS-12 is a shotgun featured in The Last Stand: Dead Zone.

The Universal Sports Automatic Shotgun 12 was designed around the 80's in South Korea, based broadly on the principles employed in another shotgun. While it doesn't have any features that makes it a 'sporting gun' (crippling its civilian availability) it sure packs enough power to destroy everything it reaches.

Equipped in limited numbers by the military and some police agencies

With its devastating damage and decent rate of fire, the USAS-12 can shred any nearby zombie with ease. However, its short range and small magazine size creates a large possibility that the wielder will be overwhelmed if they are alone. Best to keep the group tight and leave no person uncovered.

The USAS-12 in real life 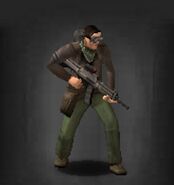 A survivor equipped with the USAS-12

A survivor shooting a USAS-12
Add a photo to this gallery
Retrieved from "https://thelaststand.fandom.com/wiki/USAS-12?oldid=127154"
Community content is available under CC-BY-SA unless otherwise noted.