This article is about the organization. For the location in TLS:UC, see Union City Police Department (location).

The Union City Police Department, often abbreviated as the UCPD, is the police force that serves Union City. During the zombie outbreak, they attempted to maintain law and order in their respective districts of Union City, serving as a beacon of hope to those who needed help. While most officers were either evacuated, killed, or zombified, much of their equipment have been left behind.

The timeline in The Last Stand: Dead Zone indicates that they were the first responders to the initial outbreak, and worked alongside HERC and the military to organize quarantines.

A portrait of a police officer in the police station (TLS:UC) 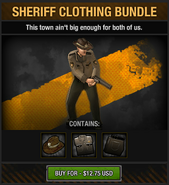 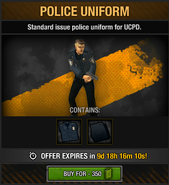 The Police Uniform package (TLS:DZ)
Add a photo to this gallery
Retrieved from "https://thelaststand.fandom.com/wiki/Union_City_Police_Department_(organization)?oldid=127151"
Community content is available under CC-BY-SA unless otherwise noted.