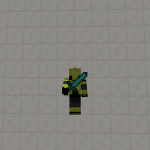 322 Edits since joining this wiki
February 18, 2014
This user is inactive right now

Welcome to my userpage, Wikia Contributor.
I know where you live. ( ͡° ͜ʖ ͡°)

As of the most current update of this page, I am 14. Currently a highschool freshman. You could call me a typical Asian I suppose, 4.0 both semesters in all the highest classes at an already competitive school.

My main hobbies are playing my cello and video games (does that count?). Well, I used to play a lot of games, including little known flash games, but now I typically stick to the "meta" games (like League of Legends etc.). The most prominent games I do play are:

Minecraft I quit a month ago, was getting boring playing since 2011 and 1.9 (so called PvP Update) is cancer.

The Last Stand Series Honestly, I haven't played the game with a full commitment since late 2015.

League of Legends Okay, I'm garbage at it, but I'm working on it ;) (please excuse my feeding)

How did you get here?Edit

Well, as I said before, I do play a lot of games.  And often, I have many unanswered questions about them.  For example, I might need to look up a crafting recipe for Minecraft, tips and tricks for the Last Stand, or some info about cars in Need for Speed.  I go to google and search up the wiki.  Since most of these games are quite big, they usually have a wiki.  As I looked up more wikis, I started to notice that all of them (minus the Minecraft wiki) used Wikia.  So I created an account on the roblox wiki using the username of the account that my friend had donated me to start me off in Roblox.

I used to be an active-ish editor on the wiki. But the game itself has slowed down a lot, and I've pretty much not touched it for over a year, so there is that. I prefer source editor over visual editor, due to its flexibility and ease of editing in certain cases.

If I could describe The Last Stand: Union City in one word, I would choose HARD. Why? Here are some reasons.

I have completed Union City legitimately once. Most of the time I just play the hacked version at Arcadeprehacks.

I was once considerably dedicated to The Last Stand: Dead Zone.  I'm level 30 something, don't know since I haven't checked in a long time. I currently have 10 survivors.  I used to raid a lot until about level 15, because then that's when there's a huge increase in available weapons, and people with lots of experience make better compound designs than the level 10 newbies.  I survived up until the level 9 infected attacks with uncommon Manning .22s and with 3 survivors before I realized I should use better guns.
Also I cri everytiem because my freaking inventory is full of vintage weapons that I can't bring myself to dispose of. They sit there, useless level 10 or so weapons, and use up a good chunk of my space, but they're no longer obtainable and might as well be relics of another age. They're so valuable to me that I can't get rid of them.

I used to go on the trade channels for weapons and public chat, but I barely play at all now, so this doesn't really apply. Those were the days. The vets will remember the old chat channels like DZ0.

Please note this is from 2013, before premium supply boxes and the newer chat channels
Here is some knowledge I'll pass on to you that I learned in trading. Take this advice cautiously, I'm rewording this section in my edit, but I still haven't traded for YEARS.Please note I wasn't a frequent trader so my knowledge is a bit limited or incorrect in some ways.

If you're looking for XP:

Low level: Street
High level: Military Base, Large Park, Construction Site, etc.
High levels looking for the ultimate challenge, seek out your highest level Unknown Building. The amount of zombies cannot be overstated, so bring your heaviest firepower.
If you're looking for resources:
In order of most resources:

If you're looking for weapons:

If you're looking for food:

If you're looking for medical items:

Tips on an ideal loadout....
Long Rifles are a staple of any raid.
LMGs for suppressing enemies.
Of course, you'll need a guy for melee, to smash those buildings down.
My loadout:

Survivors in my Last Stand: Deadzone Compound (listed in the order by which they arrived)Edit

The following images were taken at Level 23. They are really outdated.

Trevor, my character in The Last Stand: Dead Zone.

Diana Young, my second Engineer.
Add a photo to this gallery

My important items in inventory stockEdit 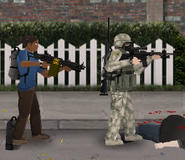 My hacked character in The Last Stand: Union City on Arcadeprehacks, armed with a Scoped M4A1 and a Scoped M24, with Kelly, who has a Military M249 SAW.

My legitimate character on Armorgames. I have a normal katana and a Spec Ops UMP45. No companions since they're both dead. :|But I do have Undefined! :D

My hacked character on a rampage!

RPG in an apartment. SEEMS LEGIT!
Add a photo to this gallery

Retrieved from "https://thelaststand.fandom.com/wiki/User:Bazooka4343?oldid=117114"
Community content is available under CC-BY-SA unless otherwise noted.