So, you decided to click on my profile, which no one does (sadly). Well, you may wonder, who am I? Well, I am your average teenage guy. Attends school, plays the alto sax, ignores French period (it's just another art period, really) and the time waster at home. I'm not stupid either, it's just that I hate checking over my work. I found TLS a couple of months ago when making my AG account for the game, Raze 2. I was bored so I decided to check out TLS:UC. After giving up (my save file doesn't save since I browse in Incognito), I checked out TLS:DZ. First few seconds got me confused so I left the game for a week (terrible decision, my leader HATED me). I came back, found this wiki and voila, I'm part of this wiki.

I wasn't always playing this game, I played some other games before that. The game Modern Combat 2 was the first I played on my Playbook, which I admit, was fun. After I finished the game (every difficulty and highest level in multiplayer) I moved on because the servers weren't working for some time.

I played another game, Forces of War (FoW), for some time and I still go on every now and then. (In-game name is ewboi123).

I've been playing this series for some time and I really enjoy the series. This wiki has been a great help to me so I decided to help out a little (lot). I'll help just about anything, as long as it isn't too complicated. I'm currently level 37 so you can't expect too much from me. I'll update my survivor pictures whenever I can (never). I'm trying to get the hang of this "template" thing, so any help is appreciated. I also bore myself adding categories to images. At least it doesn't flood wiki activity. Active user here. If you want, AMAA!

So, why the name OrangeSkittles? Because I like them.

If you want to be friends or want to contact me, use my AG account: Here Yes, I'm also known as ewboi or ewboi123. Don't ask. I also play Dead Zone on there.

I pretty much play UC on hacks because I get myself killed every time. Here's a gallery of random images. 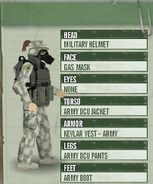 She even has Army Boots.

A normal gathering of family and friends.

We work to survive.

They're so stupid, they don't know what to do when they get shoved.

Don't mess with me.

He's wondering whether or not he should storm into my compound. Either way, he died.
Add a photo to this gallery

I'm level 37 in DZ and a member of CSH. They're pretty nice and I stay there because the people there are friendly. I frequent DeadZone0 a lot and I try to go on if I'm really bored.

Since I go on here often, I might as well add links to somewhat related stuff:

From the wiki[edit | edit source]

If you want, here are my survivors.

Spencer and his M27

Brenda and her FAL

Gabriel and his SCAR

Herpty Derp (I have no idea why I changed him to that).

Jenny uses whatever weapon she needs to use.

A SCAR or FAL will work fine with Brianna.
Add a photo to this gallery

I worked in the depot in Brookvale West as a forklift driver. That job helped me survive against them when all hell broke loose. Stealing a truck from a dead driver, I planned to drive to Union Bridge but Riverside North was the farthest I got without a driver's license. Military roadblocks, abandoned cars and debris was everywhere. I abandoned my vehicle to take shelter in a small warehouse. Little did I know, I would be there for at least two years...

One of the best (and only) fighters I have, Spencer has his roots in the military, police and even HERC. He can handle any weapon but prefers LMGs, mostly the M-27. Acts as a meat shield between the zombies so he can protect the frail people (everyone else). Loves his tactical vest, gives him both a reload bonus and a 50% health boost, shadowing his military vest.

Born from a family from an American father and a Japanese mother, Spencer lived in the Seattle region. At the age of 10, he moved with his family, including Suzie Tanaka, to Trenton. At the age of 25, he served one tour in the Middle East. He joined the police from ages 26 to 28, when the outbreak started. He was recruited by HERC to the outpost in Stadium and was stationed there. His squad was sent to Northwood East when his helicopter was shot down. Being the only survivor, he holed up in a local police station only to have it blown up by his comrades (HERC). He accepted his fate of death and wandered aimlessly. Being close to death, the zombies ignored him. He finally reached my compound, where I nursed him back to health. (Damn, my first aid skills are BEAST)

Brenda was a student of the University of Union City, taking a course in chemistry engineering. She joined the biathlon and triathlon teams since she was a fast runner. She also joined the ultimate Frisbee team. Agile and precise, she once killed 12 zombies with one 6 ammo clip of the Hunter Compact. That's a lot of headshots and penetration. Her favorite guns include: her blue Manning (which I recycled), her purple Compact her blue FAL and of course, her M24. Brenda hopes to use my stash of SVDs.

Born from a middle-class family, Martin was a normal guy. He still remembers when he got a SNES for Christmas

"Ahh, Christmas. Good memories. I remember when I was 17. Got a SNES that year. I was a few years from graduating high school. Yeah, F-Zero, Super Mario World and Star Fox didn't exactly help. I flunked. Yeah, my life sucked after high school."

Worked as a front-desk worker in the hospital down at the Docks. On the way home one day, he witnessed a crash caused by a zombie. He ran to his house, only to find his wife eating their son. He reluctantly took out a PPM and shot both of them dead. He wandered into my compound where I found a use for his secretary skills. Good saxophone player too.

Gabriel started as a surgeon in the hospital over at Union Bridge at the age of 25. He wasn't exactly the best, so he decided to be a paramedic at 28. For ten years, he was nicknamed "Speed" for the 20 seconds he took to disinfect, clean and bandage a wound from almost anything. Two years ago, he was stuck in this [[Union City]|hellhole]]. His skills have earned him the respect from many of his fellow survivors. He keeps a sidearm in case of any trouble.

"Orange" always had a sad background. His entire family moved to The Bricks. His past allowed him to make weird contraptions to do whatever he please. However, at the age of 5, his father died from a mugger. Ten years later, his mother suffered a heart attack and passed away. For the next 5 years, he was brought up from a wealthy couple who could not have their own. He experienced what his past did not, a luxurious lifestyle where his stomach would be full everyday. However, he did continue his hobby of creating different contraptions. After graduating from material engineering, Orange joined the work force. Tragedy struck again 4 years later, where his foster parents where killed from a fire in a robbery. He vowed to never let this happen again. During the apocalypse, he had nothing more to lose. His wits are used to create our weapons or to improve on others. Pretty sturdy too. Keeps to himself on most days.

Brett's past is mostly unknown. He keeps quiet and does his work. The most we know is he took shooting lessons. We're guessing his past deeply troubles him and we leave it at that. He does work well with me and Martin.

One the best medics we can ever get. She knows how to do normal medic stuff and how to use a gun. However, she is relatively inexperienced, having only been in the workforce for a year. Gabriel tries to teach as best as he can and Jenny is a quick learner. She worked as a paramedic for a year until the zombie apocalypse happened. She's witty and funny but shows a serious side to life in dangerous situations. Her skills with the Scar and the M27 are pretty good. (She's holding me at gunpoint).

A former worker for Earl of Burger down in the stadium. Her job as a cashier required fast fingers in order to give people change, if needed. After 2 years, her hands became a blur. She now works for a job that requires fast fingers. She enjoys light jogs around the neighborhood and she jogs around the compound every morning to get pumped.

Brianna was only 16 when she became trapped in the Dead Zone. Years before, she attended Canal Park Secondary School. Not exactly the brightest in math and science, Brianna found her love of literature and running. She joined both the poetry club and the cross country team. However, the zombie apocalypse stopped her dream as a writer and forced her to use her running skills. Nowadays, when she's not busy, Brianna spends her time reading.

If anyone is interested in the number of quality items I have, then here you go:

I'm not sure if this page is entirely complete, I'll say it is for now.

Retrieved from "https://thelaststand.fandom.com/wiki/User:OrangeSkittles?oldid=77207"
Community content is available under CC-BY-SA unless otherwise noted.

Ranked #5
on this wiki