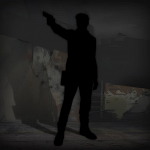 "...the natural state of mankind"
Add a photo to this gallery

Long time player of the Last Stand games. My work here on the wiki includes creating new pages when new stuff comes out, adding images, writing background and making the occasional correction to some article. I used to write for the Message Wall..

My name in-game is Souvage. Please do not raid me or if you're going to, spare my leader's life and destroy as minimum as possible. Anything you want to ask me, please leave a message and I'll reply to you ASAP.

[Thanks to K6ka for obtaining this delightful tune. No matter what they say, Ambrose is the best shotgun in TLS:DZ and TLS:UC]

Check the Spanish wiki as well and, if you have knowledge and time, lend a hand: (http://es.tlaststand.wikia.com/wiki/Usuario:Z_Creator) 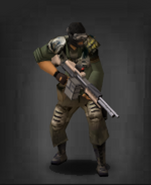 A natural-born athlete, every chance for a promising career was ruined by his extreme sense of competitiveness (and love for a goof fight). Still, working at a sporting goods store was something to be proud of. One day, he did the unthinkable when he had to take one of the nearby brand new, baseball bats to fend off a blood-covered, wild-eyed couple that entered the store. Certainly, a good way to demonstrate the quality of a Glendale Slugger.

My thoughts?
Good guy but a bit of a troublemaker. Loves fistfights and won't doubt to fight anyone who dares to insult him. Wanted to take on zombies that way but discovered they are not such pushovers. 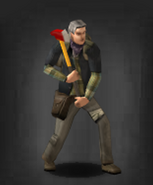 When you wake up in a room covered in blood and with someone's partly-chewed legs during a college party, you have to wonder what kind of party it had been. A group of bloodthirsty monsters chasing you down a hallway in the dorm room makes it pretty clear. It was most likely that Shawn woulda join them if it hadn't spotted that bright, shiny emergency ax.

My thoughts?
Our youngest member, good scav but sometimes risks his life for the loot. He still must learn to be a teamplayer if he wants to lead his own band of survivors once I'm gone.

Optimist, witty and slightly neurotic, Marcus was fired when a miscalculation during a demolition led to his boss new sports car being buried under tons of red bricks and twisted rebar. His unique craftiness has fueled a celebrated career as destroyer of zombie hordes.

My thoughts?
His love for crafting helped us a lot during our first months here in the Zone, but I think he needs to spend more time with people; power tools and components do not talk.

Bailey's first intention of joining HERC was because of her ailing sister, who sufers from a weak heart condition. Joining HERC only helped her sister as she was usually sent to dangerous and risky assigments, still she does not regret her shoice. HERC knows well what she is capable of so they have played their cards very carefully when it comes to "check privileges"

My thoughts?
Such a mystery. Her skills, her precision with guns and the knowledge she has makes me wonder what she's hiding. Still, asking her usually ends with a cold shoulder.

Joining the force when she was just 20, Anna wanted to follow her daddy's footsteps and become a model cop like him. But to her co-workers, she was just a pretty face in the precinct... a face that should be behind a desk. Anna saw a lot of brutality and corruption within her division, but getting the call to suit up to bludgeon a group of hooligans and realizing it was going to take more than a nightstick for a mob of "not-quite-rioters" shambling madly towards her was not what she had in mind for that day.

My thoughts?
A good nature and a smile even in the bleakest moments. She struggled through life, but strives to help others and laughs as much as possible. Such a treat and a nice add to the group.

After a knee injury ended a promising football career, Aaron spent most of his life stacking supermarket shelves, drinking cheap booze and dealing with old ladies buying tons of food with coupons. When a group of crazy-eyed, flesh eating freaks ate the customers, his co-workers and his boss right in front of him, Aaron took a crowbar and started to bash skulls. He's glad the zombie outbreak gave his life a new meaning: survival.

My thoughts?
The big, bad Valentine brother. Likes revolvers and automatic guns. Unlike the little Valentine, this one knows when fighting is required but won't doubt to help his brother. A true team player, saved my life a from both infected and HERC.

Working as the sales manager in a Levington's Departmen Store was good. Enough money to pay the bills, the landlord is happy, Eric gets to eat again. But, day after day of pushing through tons of paperwork is nothing compared to the day he saw his assistant, Linda, ate the face of the supervisor during lunch. Even better, beating to a pulp Linda's head with a fire extinguisher and making your way back home dodging mayhem at Uptown is something for the photo album.

My thoughts?
The first guy I came across. Was holed up in a bar surrounded by several bottles of cheap lager. He's my right hand man and proved himself to manage the compound fairly well while I'm out. Looks after Shawn like a son.

Bouncing here and there after being fired from every dead-end job she came across was not in Molly's head when she first arrived in Union City. She was determined to show her parents she was not going to be a lawyer like her dad expected, but leaving high school too early won't get you anywhere good either. Still, wandering around the streets of Union City has been good for something.

My thoughts?
Indecisive, yet skilled. Don't know what she really wants to be but she has been jumping from role to role. I have a hard time keeping her as a scavenger, hope she remembers last role almost got her killed.

Being assigned to the ER during the graveyard shift is interesting; you get to deal with the most shocking and bizarre cases, the kind of stuff that leaves you emotionally dead. Perhaps, this was what Angela has been looking after his spouse cheated on her with the hospital's administrator in the X-Ray Room, when her daughter left school and proclaimed herself a "free soul and cosmic traveler" and when her neighbor poisoned her parrot, George, without punishment. Blessed be the zombies.

My thoughts?
Glad she came when Charles left; guy's gonna be missed. Her skills are really good and she keeps honing them every day. Thing is, her obsession with a clean workspace (the medical bench) is kinda annoying.

This information is classified. You must have a HERC Level 6 clearance to gain access to it.

Seriously, you didn't think it would be that easy, did you?

My thoughts?
After all this time I've finally been given a desk, four cubicle walls, and just a little bit of space to decorate. Office workers (or office/corporate drone or pencil pusher, if you like, but I do not) make the company propel forward akin to oarsmen on an ancient sailing vessel. Towards middle management!.

Retrieved from "https://thelaststand.fandom.com/wiki/User:Z_Creator?oldid=131449"
Community content is available under CC-BY-SA unless otherwise noted.