This article is about the version in TLS:UC. For other versions, see Venom-MP (TLS:DZ). For an overview, see Venom MP93R (overview).

The Venom MP93R is a machine pistol featured in The Last Stand: Union City.

Aside from the M16A2, the Venom MP93R is the only other firearm that is burst-fire capable; this feature keeps the weapon accurate even after consecutive bursts at the cost of limiting its firepower at close range. To compensate for this and the slightly low damage per shot, it has a rather large capacity. Best used for small-to-medium hordes.

The Venom MP93R's image in the game files.

A survivor equipped with the Venom. 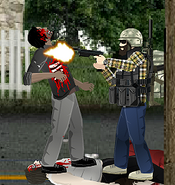 A survivor firing the Venom at a zombie.
Add a photo to this gallery

Retrieved from "https://thelaststand.fandom.com/wiki/Venom_MP93R_(TLS:UC)?oldid=121136"
Community content is available under CC-BY-SA unless otherwise noted.