For other uses, see Warehouse.

The Warehouse is a type of location that can be searched in The Last Stand: Dead Zone.

Much like their smaller cousins, these buildings were once storage and distribution points for all manner of goods to businesses throughout Union City, only on a much larger scale. Any survivors fortunate enough to have access to one of these treasure vaults won't have to worry about resources for some time.

The level of this building is always 2 levels higher than the area it is located in.

There are three very different map layouts for this location, which require different tactics. They do have two things in common; they are some of the largest maps in the game and have a lot of containers to scavenge from, so bringing a full 5-survivor team is advisable. It may also be a good idea to equip the designated scavenger with scavenging speed boosting gear like Gloves and/or bring more than one.

The first one has 3 zombie spawns widely spread out over the map, often adjacent to several containers. There are two safe zones, the initial, larger one in the main room that survivors start on and a smaller one inside the small corner office room. It has a lot of wide open spaces and clear lines of fire within the main room, which lends itself well to long rifles and assault rifles. Splitting up to cover each spawn is doable, but should be left to experienced and well-equipped survivors.

The second one has a whopping 8 zombie spawns, with 2 in each corner of the map. It is far more cramped than the previous one due to the sheer number of obstacles present, which may also force survivors to take lengthy detours. It consists of a pair of connected small rooms surrounded by a larger room. It is best to bring a good scavenger for this map, as containers are scattered all over the map and may take a while to search. Keep the team together and move counter-clockwise (from right to left) from the safe zone, as obstacles tend to obstruct clockwise movement.

The third one has 5 zombie spawns - two in the loading bay, one in the double doors between two shelves, one in the opposite side of the double doors, and one in a room with lockers. Move from container to container, keep survivors in the entrance/exit of the rooms to kill any oncoming zombie. Due to the open space, long rifles or assault rifles are recommended. 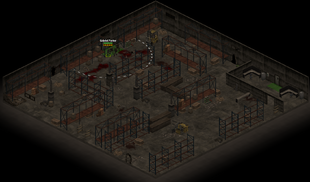 Layout of the Warehouse (A) 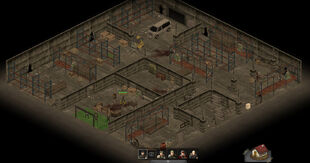 Layout of the Warehouse (B) 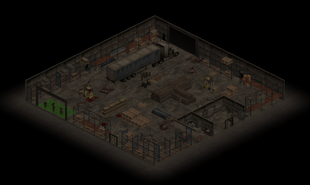 Layout of the Warehouse (C) 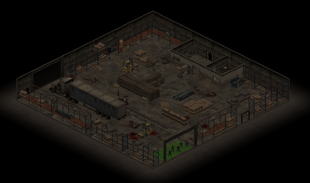 Alt. view of the Warehouse (C)
Add a photo to this gallery
Retrieved from "https://thelaststand.fandom.com/wiki/Warehouse_(TLS:DZ)?oldid=102762"
Community content is available under CC-BY-SA unless otherwise noted.