This article is about the version in TLS:UC. For other versions, see XM8 (TLS:DZ). For the LMG variant in TLS:DZ, see XM8 Light Machine Gun or XM8-LMG Mk II. For an overview, see XM8 (overview).

The XM8 is an assault rifle featured in The Last Stand: Union City.

Other than its lighter weight and unique appearance, not much distinguishes the XM8 from the game's other 5.56 mm assault rifles. Players may thus find the rifle's scarcity unwarranted, though it is still worth keeping should one be found. This weapon's largest advantage over other assault rifles is probably its balanced characteristics.

The XM8 "Baseline Carbine", the model used in TLS:UC 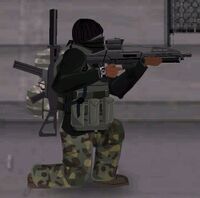 A survivor armed with the XM8 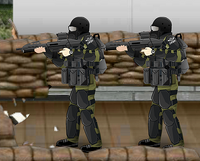 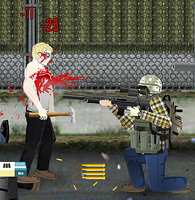 A survivor using the Spec Ops variant in combat.

A HERC sentry defending the Union Island outpost from a horde attack. The two troopers on the right wield XM8s.
Add a photo to this gallery

Retrieved from "https://thelaststand.fandom.com/wiki/XM8_(TLS:UC)?oldid=128556"
Community content is available under CC-BY-SA unless otherwise noted.